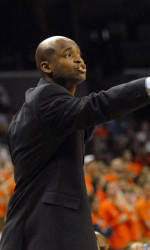 CLEMSON, SC – There are a lot of things about Clemson that appeal to James Johnson.

He loves the campus, he loves the beautiful weather and he loves the family atmosphere, but what appealed to him more than anything, when Brad Brownell asked him to join his staff last week, was Brownell himself.

It’s no secret in the coaching profession that Brownell places a great deal of trust in his assistant coaches to help with not only recruiting and the day-to-day vigors of coaching, but also scouting and in-game coaching.

This formula has proven to work, just ask the guy Johnson was hired to replace – new Mississippi State Head Coach Rick Ray. He came to Clemson with Brownell two years ago and as a first-time head coach he was hired by an SEC school.

Ray isn’t the first former Brownell assistant coach to land a head coaching job at the Division I level. When Brownell left Wright State to come to Clemson in 2010, Billy Donlon, who was Brownell’s associate head coach at the time, was offered the job.

Donlon was also Brownell’s top assistant when the two were at UNC Wilmington.

Johnson has done it in all his jobs so far as an assistant coach. During his stops at Old Dominion, Elon, College of Charleston, Penn State, George Mason and Virginia Tech he played a big role in recruiting, scouting and in-game coaching. When throwing in the experience of coaching on a Final Four team (George Mason in 2006), and then the experience he gained as an assistant coach in the ACC, he too brings a lot to the table for Brownell and Clemson.

Johnson has known Brownell for many years, and he says he was always intrigued by Brownell and the way he coached the game. So when Brownell called him about the job opening on the Clemson staff, he said it was really a no-brainer to listen.

“When you prepare for teams that you play against, you see how they play, how they recruit and how they do things,” Johnson said, “You develop a certain amount of respect for the head coach and his program because of the way he does things.”