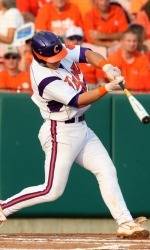 CLEMSON, SC – There were several reasons why Phil Pohl decided to come to Clemson – and one of them was the weather.

The Cooperstown, NY native was not disappointed on Friday either as the Clemson baseball team started practice for the 2012 season under blue skies and 60 degree temperatures.

“This is perfect,” Pohl said, “especially coming down from New York.”

It was a whole lot better day for Pohl and the Tigers since the last time they were on the baseball diamond, Clemson’s 14-1 loss to Uconn in the Clemson Regional Finals last May. Pohl says that experience has been the driving force for the entire team all during fall-ball and workouts.

“It is definitely a motivating factor,” he said. “We have been thinking about it all off-season. We have been working extremely well this fall and we are ready to get going this spring so we can get back there.

“I was not pleased with what happened. You don’t ever want to lose like that, especially on your home field. I’m looking forward to another opportunity to face that this year.”

To get back to the regionals and have a shot at Omaha, Clemson will have to find a way to replace five position players, including ACC Player of the Year Brad Miller. The Tigers lost all three outfielders and the two infielders that are returning, Richie Shaffer and Jason Stolz, are moving to new positions.

Stolz will replace Miller at shortstop and Shaffer will move to third base where he will replace John Hinson.

“You hear the phrase `question marks’ a lot. I don’t really view it as that, but as just a lot of guys who are trying to go out and prove themselves,” Shaffer said. Shaffer should not have to prove himself too much. The junior played third base in high school and was the backup to Hinson and played there some last season. But now that he is moving back to his former position Shaffer feels like he is back where he belongs.

“I’m excited,” he said. “It’s a chance to go back home for me. That’s where I was coming out of high school, but the team needed me at first, so that’s what I had to do. You have to do whatever is in the team’s best interest.

“I’ve been working hard in the fall at third. This is my natural position and I feel comfortable over there, so there’s no learning curve, which is helpful. I’m just going to hit the ground running and help out the pitchers as best I can. I have to work on the instinctual things, the split-second decisions…with more repetition comes more improvement and more confidence.”

Confidence should not be an issue for Shaffer. Last season he hit .315 and led the Tigers with 13 home runs and 55 RBIs. This past summer he went to the Cape Cod League and put up similar numbers and with that he is being expected along with Stolz, Pohl and pitcher Dominic Leone to be a one of the leaders in the clubhouse.

“We have four really good leaders plus a few other guys that have been down here every day working hard and bring leadership in different ways,” Clemson Head Coach Jack Leggett said. “I like the chemistry we have on this team.”