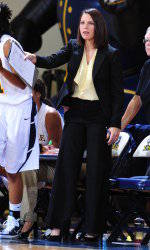 ClemsonTigers.com Exclusive: Callahan Worked Hard to get to Clemson

CLEMSON, SC – When Jayme Callahan walked into the women’s basketball offices at the Jervey Athletic Center Monday morning, the first thing she did was take a picture of her name plate on the wall outside her office.

“She sent me something back saying, `Oh, I’m so proud of you,'” Jayme said.

But, it is Jayme Callahan who is proud. She is proud of her mother. Jayme says her mother has been her inspiration since she was a little girl. A single parent, Sandy sometimes worked two or three jobs so her two children, Matt and Jayme, could play sports and have the things they needed for school.

“If we needed money or we needed something, she would go get another job,” Jayme recalled.

Sandy worked as a lab technician at an area hospital and helped with drug studies as well at other laboratories. Jayme says if those two jobs did not bring enough money in for their expenses, her mother would find something else temporarily to make ends meet.

“She did whatever it took to make sure things were taken care of,” Jayme said.

Jayme studied her mother’s work ethic growing up, and when she decided to become a coach after her college-career ended at Missouri Southern State in Joplin, MO, she adopted her mother’s never quit attitude to move up the coaching ranks.

The Lady Tigers’ newest coach started her career as a high school coach. Like her mother, Jayme had to work two jobs at times to make ends meet. With a degree in health promotion and wellness, Jayme worked as an exercise specialist for three years. She started doubling up when she coached at Trinity High School after a brief stint at Putnam County High School.

Because of her job as an exercise specialist in the afternoons, Jayme held her practices at 6 a.m. during the season.

“My players hated me,” she laughed. “It was a little crazy, but that was nothing compared to a lot of the hours we put in now.”

Taking another pay cut, Jayme eventually moved into the college ranks were she coached at Division II Missouri-St. Louis. Even then, she had to work extra hard to make ends meet.

“I was still an exercise specialist and I would get a little stipend on the side, but I was considered a full-time coach,” she said. “The bus would go, and I would meet them there, go to the game, come back and then work that night. None of my expenses were paid, and I did not care.

Finally, Jayme’s hard work and dedication paid off when she was hired as a head coach at Division III Webster State University, and then two seasons as an assistant at Southeast Missouri University, before landing a job on Jeff Williams’ staff a LaSalle University last year.

“I finally got to coach,” the former point guard said.

Now, she is at Clemson, and her dream of coaching at a major college in a BCS conference has come true. She is so glad that opportunity came at Clemson, too.

Jayme says she is so appreciative that Coach Coleman saw her moving from school to school through the years wasn’t as a result of uneasiness, but more of a passion and desire to want to improve her situation, and her willingness to work for what she has accomplished.

“I have been to a lot of schools in my 10 years in coaching,” Jayme said. “A lot of people will say, `Can she stop bouncing around.’ I don’t want people to perceive that because I have moved a lot. But, it has always been in a good direction. Coach Coleman got that, and I will always appreciate that she really sat down and got it.

And no one is happier about that than Jayme’s mother.

“She didn’t understand me taking the cuts in pay that I did all these years,” Jayme says. “She was always worried about me. She would say, `Please make some money so you can take care of yourself. I just want to know if you are taken care of.’

“She still calls and asks me if I’m okay, that’s the way she is, but now, she knows that I am okay. She told me the other day she was proud of me.”