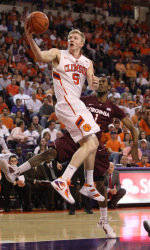 CLEMSON, SC – The last time Tanner Smith and Andre Young was last October when he and his two seniors shared a car ride to Charlotte, NC while on their way to ACC media day.

Following Thursday’s 58-56 victory over Virginia Tech on Senior Night at Littlejohn Coliseum, Brownell shared the podium with his two captains – a moment he enjoyed by taking playful jabs at the two of them or by rubbing their heads or patting them on the back a time or two during the press conference.

“They are great people,” Brownell said. “They are special guys, and I really mean that. They don’t get enough credit for being good players. They are very good players. We look at things the wrong way sometimes.

“But all the things they can do, make threes, make good passes, basketball IQ plays, poise under pressure, willingness to be coached, willingness to come work hard every day, willingness to be leaders and to put their neck out there in front of other people. There are a lot of things that going into being really good, like caring more about the team then more about your stats and what is going on with that. With these guys, there are checks in all those boxes.”

And though it was their special time, Smith and Young were filling those boxes up with check marks and doing everything they could to keep their teammates focused on a night that was so emotional for them.

Smith finished with 14 points, had six rebounds, four assists and two steals, while Young tallied 10 points, two assists and two steals. But it was during the timeouts when Smith and Young really showed their leadership, as they encouraged their teammates on even when things at times were not going right and the Tigers fell behind by 10 points.

The Tigers (16-13, 8-7 ACC) rallied, though. And they did it with their two generals leading the way. Both made key baskets in the second half, even though the team was struggling as a whole to shoot the basketball.

For Smith, it was especially gratifying after he missed a jump shot as time expired in a two-point loss to the Hokies at Virginia Tech on Feb. 4. But on this night, Smith scored five of Clemson’s final seven points, including two free throws to give the Tigers the lead, and he then grabbed the rebound off Cadarian Raines’ missed free throw in the last two seconds of the game.

“It was nice,” Smith said. “I had that same kind of opportunity at Virginia Tech. I had the ball in my hands off the tip out from a missed free throw, and I missed the shot. But it was nice that this time I got the rebound. You can’t help but have flashbacks to Coastal Carolina, where a team gets a tip-in at the buzzer, but (Devin Booker) and (Milton Jennings) really fought down low and they could not get a clean one.”

Brownell said Smith’s rebound was an ideal situation because it was Smith’s and Young’s willingness to accept him, along with fellow seniors Catalin Baciu and Bryan Narcisse, that allowed he and his coaching staff to be trusted.

“I think they have embraced it. I think there is something about what we are doing, that they enjoy it. Not that they did not like the full-court pressure style of play, but I think they really like what we do. These two guys are basketball guys. It was a chance to learn a different type of basketball and to be coached in a different way. They are so open minded and are good people, that if you treat them right, they will work hard for you.

“You can be hard with them. You can be firm. You can give them discipline, and you can be demanding. As long as you are fair with them, and they understand what you are trying to do, they are going to be with you. That is all you can ask for as a coach.”