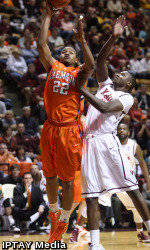 CLEMSON, SC – When looking at his team following last week’s loss to Virginia Tech in the ACC Tournament, Clemson Head Coach Brad Brownell figured it was time for his team to rest. So with that, he and the rest of the coaching staff decided it was in the best interest of the program to close shop on the 2011-12 season and start building toward next year.

“When looking at our seniors, I think they were just about done,” Brownell said at his final press conference of the season Wednesday inside Littlejohn Coliseum. “I think they were finished emotionally, physically, and they were tired.”

Brownell said there is a finality that a player prepares himself for and he thinks that might have come earlier in the season for his players when Clemson basketball had its 100th anniversary celebration on Feb. 25, which concluded with an emotional overtime victory over NC State, and then celebrated Senior Night a week later against Virginia Tech, which was a last-second victory as well.

“There was a little emotion and I think a little stress, because we wanted to play well and we were trying to play well for who we were playing for,” he said.

At the beginning of the season, Brownell hinted he was a little concerned about what the future holds for next season when he will have five freshmen and five sophomores on a roster that will have only two seniors. And though he feels somewhat better about those prospects after receiving some productive games from his current freshmen, Brownell says there is still some uneasiness as he looks ahead to the 2012-13 season.

“One thing this year’s freshmen would say, if you asked them, would be that they did not know that there was so much that went into basketball. They did not know it was this complicated,” Brownell continued. “Their preparation at this level is so much different than anything else they are used to. They did not realize there were so many different ways to play against ball screen defense and different things you have to do in order to get open. They were not used to doing all of those different things.”

Brownell says the process doesn’t really begin until a player has first failed. He says that’s when a player really starts to pay attention to what is going on. However, he is excited about the 2012 signing class he inked last November, which includes Jaron Blossomgame, a 6-foot-7 forward from Alpharetta, GA, Adonis Filer, a 6-foot-2 guard from Chicago, IL, Landry Nnoko, a 6-foot-11 center from Cameroon, Jordan Roper, a 6-foot guard from Columbia, SC, and Josh Smith, a 6-foot-8 forward from Charlotte, NC.

Brownell understands there will be some growing pains with the new freshmen, just like he had with this year’s rookie class.

“Look at Devin Coleman, for example. Until you really start going through it and it wakes you up, only then do you start to pay attention,” the Clemson coach said. “You hate that some of that has to happen, but it does. Guys learn differently, and there is a process involved with it.

“Certainly, that is a concern for next year. We are going to have 10 underclassmen and only two older players, but certainly I think we can overcome it and have success.”

Time will tell, and that time will begin when the five incoming freshmen hit campus in July for the second summer session.

“It will be very beneficial for them to get in here and start working hard as early as they can,” Brownell said.