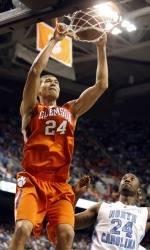 CLEMSON, SC – If Clemson hopes to continue its run of consecutive trips to the NCAA Tournament, it is going to need Devin Booker and Milton Jennings to step up.

“It’s their time,” Assistant Coach Mike Winiecki said. “As juniors they are going to be our starting frontcourt. I think with their versatility, it is going to be really hard for guys to match up. They can both go inside and outside.”

Booker is a 6-foot-8, 245-pound forward who has the jump shot to force other post players outside, while also having the power and skill to score at the basket, as well as rebound. Jennings, who also plays forward, is more of a perimeter player, but he has shown the ability in the past to score in the post, an area he continued to make strides in during the offseason.

“I had to work on my physicality,” Jennings said Tuesday during Clemson’s annual media day. “I really got in the weight room and lifted my tail off. I did the things that (former strength coach) Preston (Greene) asked me to do during the summer, whether it was lifting a car or pushing an 800-pound tire up a hill. Whatever it was, I did it to my best ability.”

Jennings feels the extra work should pay off when the Tigers get into the heart of the ACC season. Last year, the 6-foot-9, 225-pound junior was fourth on the team in scoring (8.3 points per game) and third in rebounding (5.2), despite not being physically where he and Winiecki desired.

“He is getting more physical every day as we challenge him with different drills. Obviously, he can step out and shoot it, but I think he has done a great job.”

As for Booker, he has stepped up as one of the team leaders Clemson Head Coach Brad Brownell is seeking. During team workouts, he has been boisterous and encouraging to the young guys when the team runs.

“Devin has been really good with encouraging those guys,” Winiecki said. “He has helped them get through those sprints. He has helped them in team settings. He knows all the shell defensive slides and he has been talking to them.

“Even in the offense, he knows when to screen and what angle to screen and how to pop back. It has actually been good to have those six new guys, because he and Milton have helped bring them along, and that has in turn helped the both of them.”

Booker says he learned early in the summer he needed to be a leader because a lot of the younger players were coming to him with questions and asking about certain things and how to handle those things.

“I had to show them the ropes a little bit,” he said. “It basically made me take some ownership in this team. I’m going to do my best to try and help us have a better season than last year.”

Clemson is coming off a 22-12 season in which it won its first NCAA Tournament game since 1997. Players like Demontez Stitt and Jerai Grant – seniors at the time – played a big role in leading underclassmen like Booker and Jennings through some ups and downs.

Now it’s up to Booker and Jennings.

“We have to pick up the intensity,” Booker said.