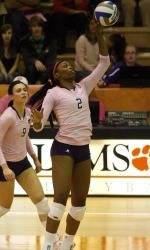 ClemsonTigers.com Exclusive: Adeleye gets her groove back

CLEMSON, SC — On a night that saw the Clemson volleyball team’s first sweep of Duke since November 9, 2003, junior Sandra Adeleye turned in a performance that even made Head Coach Jolene Hoover say, “Wow! Look at that stat line!”

The middle hitter from Katy, Texas recorded 19 kills in 33 attempts, three blocks and zero attack errors in a match where the Tigers hit .303 as a team and held Duke to just a .163 hitting percentage.

“You don’t really think about your stat line during the game, even when you’re on a no-error streak,” Adeleye said. “Hannah (Brenner) was setting great balls today so it was pretty easy with the way she was playing.”

A night like that is good to see from the two-time all-ACC performer. Earlier in the season, her stat lines did not read the way they do now, but she didn’t let that affect her.

“I was getting blocked a lot in the beginning of the year,” she said. “You can’t let that affect the way you play. That’s just volleyball. Mistakes happen. It’s something that’s frustrating in the moment, but one of the things that helps you win games is being able to shake it off.”

Hoover said it was just a matter of her getting used to things and settling in.

“We’ve had different line-ups, different setters, and a lot of adjustments going on this year,” the Clemson coach said. “Now I think she has settled in a little more. We’ve been in a 5-1 recently and she’s just been dealing with Hannah as a setter, that’s helped her settle down. She’s going hard at every ball now, expecting to get set. Before, she was waiting to see where the ball was going to go, but now she’s committed on every play.

“Sandra played great tonight. She went hard to the ball every time. Hannah did a good job finding her. We did such a good job handling the ball tonight, it allowed us to get the ball to the middle, which then allowed Sandra to have the touches she had. She played phenomenal tonight. It even seemed like she was jumping higher because she was going harder.”

The matchup between Clemson and Duke was set up to be an exciting one because of the game the two teams played earlier in the season in Durham, NC. That night, the Tigers fell to the Blue Devils in a hard-fought five-set match, with the deciding set becoming the second-longest set in NCAA history.

“We were really hungry tonight,” said Adeleye. “We really wanted this badly, especially because of the outcome we had when we played at Duke.”

That hunger showed.  The Tigers used a 16-5 run to close the first set. Clemson climbed out of a 14-9 hole and four of Adeleye’s five first-set kills came during the Tigers’ closing run.

In the second set, Adeleye had nine kills in 12 swings and with almost every kill managed to take away any kind of momentum the Blue Devils were building (five of her nine kills came immediately after a Duke point). There was also a four-point stretch where Adeleye was responsible for every “point Tigers” that was echoed throughout Jervey Gym.

After a kill by the Blue Devils, Adeleye had back-to-back kills, a block, and another kill before Duke was able to side out, just to have the ball given back to the Tigers on another Adeleye kill.

The Tigers were able to hold off a furious Duke rally to take the second set 25-23. In the third and final set, the Tigers again fed off of Adeleye’s play-making ability to take the set 25-22. Ahead 5-4, Clemson used an Adeleye kill and back-to-back blocks to push the lead to 8-4, which gave them the momentum they needed to defeat the defending ACC Champions.

A crowd of 1,717 was on hand to see the Tigers cruise over the Blue Devils in the “Dig Pink” match, a match dedicated to breast cancer awareness.

“We love when people come out and support us, especially for a great cause like this,” Adeleye said. “It’s so nice to walk out and see the gym full. We only have three more home games left this year. We hope we get the same results as tonight and we want to have the same atmosphere that we’ve had in Jervey all year.”