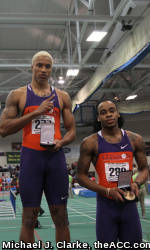 ClemsonTigers.com Exclusive: Adams in Search of Outdoor Gold This Weekend

CLEMSON, SC – Spencer Adams is in the midst of his first athletic season as a single-sport athlete. Recruited to play football and run track at Clemson, he decided to focus solely on the latter prior to the 2011-12 academic year.

Results indicate that it’s been the correct decision for the red-shirt junior hailing from just up the road in Charlotte, NC. In February, he won his first career individual ACC championship in the 60 hurdles. He followed the next month with an All-America, fifth-place effort at the NCAA Indoor Championships.

Adams’ confidence has soared since winning the ever-elusive individual crown.

“It’s gratifying to know that I’ve gotten that one championship I’ve been in search of for so long out of the way,” he said. “Now, I can focus on doubling up and winning both hurdle events this weekend.”

He and his teammates are headed to Charlottesville, VA later in the week to compete in the ACC Outdoor Championships. Adams is two-time All-ACC in the 110-meter hurdles, earning the honor in 2010 and 2011. He also earned all-conference status in the 400 hurdles in 2010 as a freshman.

As a prep star at David W. Butler High School, he was the nation’s most highly coveted hurdle prospect. He won national championships in both hurdle events as a high school senior.

Adams will compete in the prelims for both running events on Friday, April 20. He is scheduled for the 110 prelims at 4:40 PM, followed by the 400 prelims at 6:55. Should he advance to the finals, both will be held Saturday at the University of Virginia’s Lannigan Field.

Adams has been consistent this outdoor season. He has a best of 13.72 in the 110 hurdles on two occasions, but most recently did it at the Pepsi Florida Relays against a strong field and a fierce headwind. He clocked a personal best in the 400 hurdles at the Jim Click Shootout in Tucson, AZ last month, a time of 51.43 that ranks among the top 10 in Clemson history.

He is part of an up-and-coming men’s program that looks to improve on its fourth-place team finish from a year ago at the ACC Outdoor Championships.

“We have to capitalize on other teams’ mistakes and be gritty enough to fight for every point we can get,” said Lawrence Johnson, Clemson’s Director of Track & Field. “We can find ourselves in the upper echelon of the ACC. It’s not going to be easy, but once we get there, the kids will get that taste in their mouths and want to do it again next year.”

A big factor in Clemson’s improvement on the men’s side has been the hurdles unit, which is deeper than it’s been in years under Johnson’s watch. Adams has seen gradual improvement from veterans Marcus Maxey and Charlton Rolle, and he sees potential in freshman Elijah Britton.

At the ACC Indoor Championships, Tiger hurdlers took four of the top six spots in the finals, with Adams on top and Maxey claiming his first-ever All-ACC nod in third place. This outdoor season, the four combined to a time of 55.38 and a collegiate best in the shuttle hurdle relay, second-best on record at Clemson.

“As a group we’ve always been close, since Charlton and Marcus came,” he said. “Elijah has added a spurt of energy to us. We have depth, and the best shuttle hurdle relay in the nation. It gives us confidence. We’re a hurdle-based program, and we’re the best in the ACC. We pride ourselves on that. We have to make sure all four of us are in the finals, and that we’re all together on the podium.”

Adams and his fellow hurdlers will get that chance this weekend in Charlottesville.