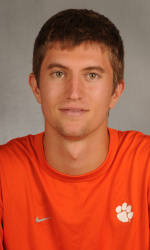 CLEMSON, SC – Yannick Maden has been named to the 2011 Men’s Tennis All-ACC Academic Team Thursday as announced by the league’s Commissioner John Swofford.

To be eligible for consideration, a student-athlete must have earned a 3.0 grade point average for the previous semester and maintained a 3.0 cumulative average during his academic career.