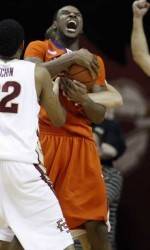 CLEMSON, SC – Former Clemson forward Trevor Booker was selected in the first round of the NBA Draft by the Minnesota Timberwolves on Thursday. Published reports say Booker’s rights may be traded to the Washington Wizards. The first-team All-ACC player was the 23rd overall selection of the entire draft. With his selection, he is the first Clemson player chosen in the NBA Draft since Will Solomon was the No. 33 pick in 2001 by the Vancouver Grizzlies.

With the selection, Clemson has now had a first-round pick this season in baseball, basketball and football. C.J. Spiller was the #9 pick of the NFL Draft by the Buffalo Bills, while Kyle Parker was the 26th player taken by the Colorado Rockies in the MLB Draft. It marks only the second time in school history Clemson had first-round selections in all three sports in the same year. In 1987, Horace Grant was the #10 pick of the NBA Draft, Bill Spiers was pick #13 of the MLB Draft, and Terrence Flagler was selection #25 in the NFL Draft. Clemson, Georgia Tech and Texas are the only schools in the country this season with first-round draft picks in all three sports.

Booker’s selection was the first for a Clemson player in the first round since Sharone Wright was the sixth pick of the 1994 draft. Booker is the seventh first-rounder in Clemson history, and all seven have been post players. Amazingly, Booker was the first senior selected in the opening round of the draft at #23.

Booker had an outstanding career at Clemson and left as the school’s all-time leader having played in 93 victories in his four years with the program. He finished his career third in Clemson history with 1,060 rebounds and fifth with 1,725 points. He led the Tigers to three consecutive NCAA Tournament appearances and to the championship game of the ACC Tournament as a sophomore in 2008.

He was second-team All-ACC as a junior in 2008-09 when he led the conference in both rebounding and field goal percentage, and then was named to the first team as a senior this past season. He was the first post player from Clemson to be named first-team All-ACC since both Elden Campbell and Dale Davis in 1990. Campbell and Davis both went on to play over 10 years apiece in the NBA. Booker was also a two-time All-ACC Defensive Team selection.