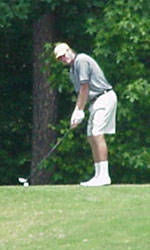 Birmingham, MI – Clemson rising senior D.J. Trahan fired a three-under-par 67 and stands in a tie for fourth place out of 312 golfers after the first round of the United States Amateur. Trahan played the North Course at Oakland Hills Golf Club in Birmingham, MI.

Trahan is one of two members of the Clemson team to qualify for the stroke play portion of the event. Brian Duncan, who will be a red-shirt freshman on the 2002-03 Clemson team, shot a 73 and stands in a tie for 85th.

There will be one more round of stroke play on Tuesday. The top 64 players will advance to match play, which starts on Wednesday.

Trahan played on the North Course in the morning and had five birdies, 11 pars and two bogeys. He was three under par on the par fours. He began the event with three birdies on his first five holes. He had a 31 on the front side, then shot 36 on the back.

Duncan, who played the tougher South Course, had nine hole scores of 36-37. He had four birdies, five bogeys and eight pars.

“If you can play well the first round, it changes the way you feel about playn the second day,” said Trahan. “Today was a good start for me knowing that I have to play the South Course yet.”

The championship will run through Sunday when the 36 hole championship match will be played. Chris Patton (1989) is the only Clemson player in history to win this event. Trahan won the 2000 United States Public Links Championship, a similar tournament in that it has two rounds of stroke play followed by a 64-player match play tournament.