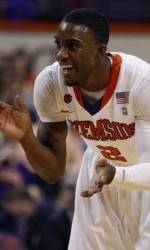 The Naismith Memorial Basketball Hall of Fame in Springfield, Massachusetts announced today the candidates for the 2011 Bob Cousy Award. The annual award, named for Hall of Famer and former Boston Celtic Bob Cousy, recognizes college basketball’s top point guard. Total of 66 players have been nominated for the 2011 award. Nominations were solicited from all schools across the country.

Clemson senior Demontez Stitt is one of the candidates. The Matthews, NC native has been a four-year starter for the Tigers, including his first three seasons at the point guard position. He leads this year’s Tiger team in scoring at 13.8 points per game after moving mostly off the ball. Stitt has missed the last two games following arthroscopic knee surgery. He has played in 103 games in his career and scored 1,026 points, sixth-best among active ACC players.

“The Hall of Fame is proud to once again work with Mr. Cousy and to present one of college basketball’s most coveted awards,” said John L. Doleva, President and CEO of the Basketball Hall of Fame. “This list represents a wide range of college basketball’s top players and we look forward to honoring the legacy of Mr. Cousy with this year’s award winner.”

“Bob is one of the great players in the history of basketball and his point guard ability was well ahead of his time,” said Ken Kaufman, Chair of the Bob Cousy Award. “This award recognizes his incredible talents from the past while also honoring the best in today’s game. We look forward to honoring this year’s award winner come April.”

This original list of candidates will be narrowed down to a final 20 by January 3rd, final 10 by February 3rd, and final five by March 3rd. A Hall of Fame appointed screening committee will be narrowing down the candidates from 20 to 10 to 5 prior to a Blue Ribbon Selection Committee evaluating the final five candidates and ultimately choosing the winner. Both of the Hall of Fame committee’s are made up of top college basketball personnel including media members, head coaches, Sports Information Directors and Hall of Famers. The winner of the 2011 Bob Cousy Award will be presented at the Hall of Fame’s Class Announcement on Monday April 4th in Houston as part of NCAA Final Four weekend.