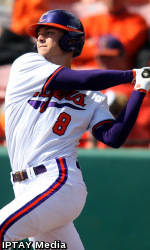 GREENSBORO, NC – Clemson infielder Richie Shaffer has been named the Atlantic Coast Conference Baseball Player of the Week, while Wake Forest’s Brian Holmes earned Pitcher of the Week honors. Shaffer stood out offensively in the Tigers’ weekend series against second-ranked South Carolina, while Holmes threw a no-hitter in Sunday’s win over Marshall.

Considering the level of competition, Shaffer had one of Clemson’s greatest three-game series in recent history at the plate. Possessing arguably the nation’s top pitching staff, the two-time defending NCAA champion Gamecocks entered the series with an incredible 0.86 ERA and .112 opponents’ batting average. Shaffer went 6-for-9 (.667) with two homers, two doubles, four RBIs, six runs, and six walks. The Charlotte, N.C., native reached base in 12 of his 15 plate appearances (.800 on-base percentage) and had a 1.556 slugging percentage. He had at least two hits in each of Clemson’s three games this past week. On both Friday and Sunday, he reached base in all five of his plate appearances. On Sunday, he went 2-for-2 with a homer and three walks and helped Clemson to a come-from-behind 6-5 win, ending South Carolina’s 19-game winning streak.

In addition to throwing his no-hitter on Sunday, Wake Forest’s Holmes struck out a career-high 10 batters in a 5-1 win over the Thundering Herd. Marshall scored its one run after two hit batters, a walk and a sacrifice fly in the sixth inning. Aside from that inning, Holmes retired 24 of the 25 batters he faced, hitting just one batter in the second inning. The Lawrenceville, Ga., native retired the first four batters of the game and 16 of the first 17. Holmes ended the game by retiring the final nine batters of the game, needing just nine pitches in the seventh inning, 11 pitches in the eighth inning and 13 pitches in the ninth.

Holmes’ no-hitter was the first for the Deacons since Ben Clayton performed the feat against UNC Greensboro on March 27, 2000. The win also extended Wake Forest’s winning streak to eight games, which is the longest such streak since the team won 11 in a row back in 2006. Holmes’ no-hitter was the first by an ACC pitcher since Virginia’s Will Roberts’ perfect game against George Washington last March 29.