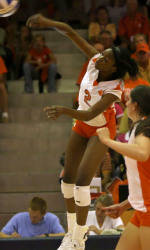 GREENSBORO, NC – Clemson freshman middle blocker Sandra Adeleye and Duke senior outside hitter Rachael Moss were selected Atlantic Coast Conference Volleyball Co-Players of the Week, announced today. Adeleye is just the second freshman to earn the award this season, while the honor is Moss’ second of 2009.

She posted 13 kills and six blocks in three sets against Maryland, hitting .524, and then had a career-high 23 kills to go with five total blocks in the Tigers’ 3-1 win at Boston College, propelling Clemson to their 20th win of the season. During the weekend, she averaged 6.71 points/set and accounted for 43.0 of Clemson’s 176 points (24.4%). She hit .550 for the weekend and had only three errors in 60 swings.

For the season, Adeleye is third place in the ACC in hitting pct. at .389, she is second among all league freshmen in kills/set (2.82), remarkable for a middle hitter, and is third in the ACC in blocking (1.18/set).

Adeleye is the first freshman to be named a Player of the Week from Clemson since Jeannette Abbott earned the honor on Sept. 24, 2009. She and Abbott are the only two players in Clemson history to earn the honor as freshmen. Abbott went on to win the league’s Rookie of the Year award that year as well.

She is also the second Tiger to earn the honor this season, as Kelsey Murphy was named the ACC Player of the Week on Sept. 7, 2009.

Both Clemson and Duke will return to action on Friday, November 13 as Duke will travel to Blacksburg, Va. to take on Virginia Tech in Cassell Coliseum at 5 p.m., while Clemson will host nationally-ranked Florida State at 7 p.m. in Jervey Gymnasium in Clemson, S.C. Duke will then go to Charlottesville, Va. to play Virginia on Saturday, November 14 at 7 p.m. in Memorial Gymnasium and Clemson will host Miami at 6 p.m.