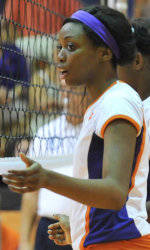 Just a week after earning her second All-ACC honor, Clemson sophomore middle hitter Sandra Adeleye has been named to the American Volleyball Coaches Association (AVCA) All-East Region team for 2010. It is her second straight season earning the award, as she was named the East Region Freshman of the Year in 2009, along with nabbing a spot on the team.

Adeleye, a native of Katy, TX, is automatically an honorable mention All-American by the AVCA from her selection, and she is nominated for the AVCA’s three All-America teams, which are announced Dec. 14.

Adeleye is the first Tiger to garner all-region honors in each of her first two seasons since Jodi Steffes Welp, a 2009 Clemson Athletic Hall of Fame inductee and current assistant coach, was named to the team in all four years of her career (1998-01).

Adeleye ranked fourth in the conference with a 3.42 kills/set average and a 4.08 points/set average, and ranks fifth in the ACC in blocking at 1.09 per set. Adeleye had double-digit kills in 17 straight matches to close the season and in 28 of 31 matches overall. She posted a career-high nine blocks in three different matches as well.

She becomes the 38th All-Region selection under Jolene Jordan Hoover in her 18 seasons.

Clemson finished the season at 18-13 overall and 9-11 in the ACC. It was the fifth straight season that the volleyball program has posted a winning record.