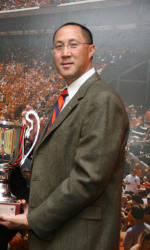 Charlotte, N.C. – Rising Senior Michelle Parkhurst and May graduate Stephen Russell qualified for Olympic Trials at the Charlotte UltraSwim on Friday. Parkhurst qualified in the 200 free, while Russell hit his mark in the 100 butterfly. Olympic trials will be held June 29-July 5 in Omaha, Ne.

Russell became the seventh Tiger to qualify for Olympic trials, posting a 55.55 second showing in the 100 butterfly. The cut-point is 55.59, which Russell achieved in the finals. Russell is third on Clemson’s all-time list in the 100 (yard) fly with a 47.85.

The other Tiger Qualifiers for the Olympic Trials are: