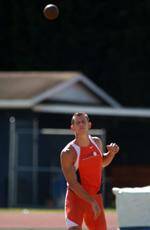 CLEMSON, SC – Clemson men’s track and field stand-out Rick Hill was named a 2004 NSCA All-American Strength and Conditioning Athlete of the Year. The NSCA All-American Strength and Conditioning Athletes of the Year program recognizes those collegiate athletes, whose athletic accomplishments, in the opinion of their strength coach, reflect their dedication to strength training and conditioning. These athletes are also recognized for their academic and personal accomplishments and their integrity as student athletes. Hill is the first men’s track and field student athlete at Clemson to earn this accolade.

Tanna Burge, a strength and conditioning coach for the Tigers said the following of Hill: “Rick has had an incredible career at Clemson. He walked on the team his freshman year as an average athlete and through his dedication and hard work has become one of the top decathletes in the nation. Rick won the 2002 ACC Championship in the decathlon and has competed at Nationals for the last three years. The two time team captain earned his degree in Marketing with a 3.6 GPA and has been selected as an Academic All-American three straight years. Rick is now working towards his graduate degree and another ACC Championship. Rick is proof that hard work in the weight room can make you a better athlete.”