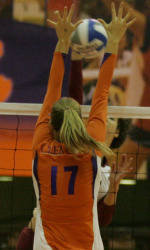 GREENSBORO, NC – Clemson volleyball sophomores Natalie Patzin and Alexa Rand were named to the All-ACC Academic Volleyball team on Friday as announced by the league office. It was the second career honor for Patzin and the first for Rand.

Patzin, a biological engineering major from Naperville, IL, played in every set for the Tigers during the 2010 season. Patzin averaged 1.92 kills per set and 2.50 digs per set. She crossed the 500 kill – 500 dig career milestones during the season.

Rand, a special education major, played in 114 sets for the Tigers, and led the ACC in blocking with 1.45 per contest. The Ohio native was second on the team in hitting percentage, and finished averaging 1.54 kills per set. Her 162 blocks were the 9th-most in a singles season in school history, and was a major reason why Clemson led the ACC in blocking for the third straight season.

Clemson finished the 2010 season at 18-13 and an RPI in the top 65. Clemson lost just one senior, and has a promising set of freshmen coming in. The spring season starts in March with a scrimmage against Georgia Tech in Atlanta on March 16.