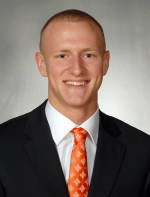 Greensboro, NC – Terrence Oglesby was named ACC Rookie-of-the-Week on Monday, one day after his three-point shot with 2.3 seconds remaining lifted Clemson to an improbable comeback win from a 20-point second half deficit.

Oglesby sank four three-point goals, all in the second half, to total 12 points in the Tigers’ furious rally at College Park, MD on Sunday. Clemson was down 59-39, but pulled to within seven at 60-53 after a pair of three-pointers from Oglesby. With the score tied at 70 apiece, Oglesby caught a pass from K.C. Rivers on the right wing and nailed his fourth long-range basket of the night to give Clemson its greatest second half comeback in school history.

For the week, Oglesby made 6-13 on three-point attempts for a 46.2 percent accuracy. On the season, he has made 70 three-point goals and is shooting 40.7 percent from outside the arc. His 70 made three-point goals rank second in Clemson history by a freshman. Tony Stockman made 75 in 2000-01.