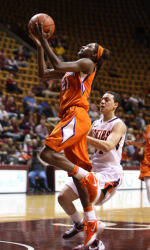 GREENSBORO, NC – Clemson freshman Nikki Dixon has been named the ACC Rookie of the Week for the period ending Feb. 5, 2012 as announced by the league on Monday. Dixon averaged 17.5 points and 4.5 rebounds in 36.0 minutes per game for Clemson on the week, an overtime win at Virginia Tech, and a road loss at No. 7 Miami. It is her third honor of the season, and second in as many weeks.

Last week, Dixon became only the fourth player in program history to earn two such honors, joining Amy Geren (1995-96), Chrissy Floyd (1999-00), and Lele Hardy (2006-07). With this week’s performance, she is alone as the only Clemson player with three weekly rookie honors.

Dixon scored 19 points and 16 points at Virginia Tech and Miami, respectively, leading Clemson in each game. She had 13 of her points against Virginia Tech in the second half and overtime after receiving two stitches to her forehead as the result of a first-half collision.

During the last two weeks, with three games against ranked teams, she averaged 16.0 points, 4.8 rebounds, and 2.5 steals per game while shooting .391 from behind the arc in 35.5 minutes per game.

The freshman is averaging 12.7 points per game this season, second among all league freshmen, and her 2.5 steals rank third in the conference overall.

Clemson has now claimed four of the weekly honors overall, as Kelly Gramlich earned the honor on Dec. 19. It marks the first time in school history that Clemson has claimed four Rookie of the Week honors in a season.