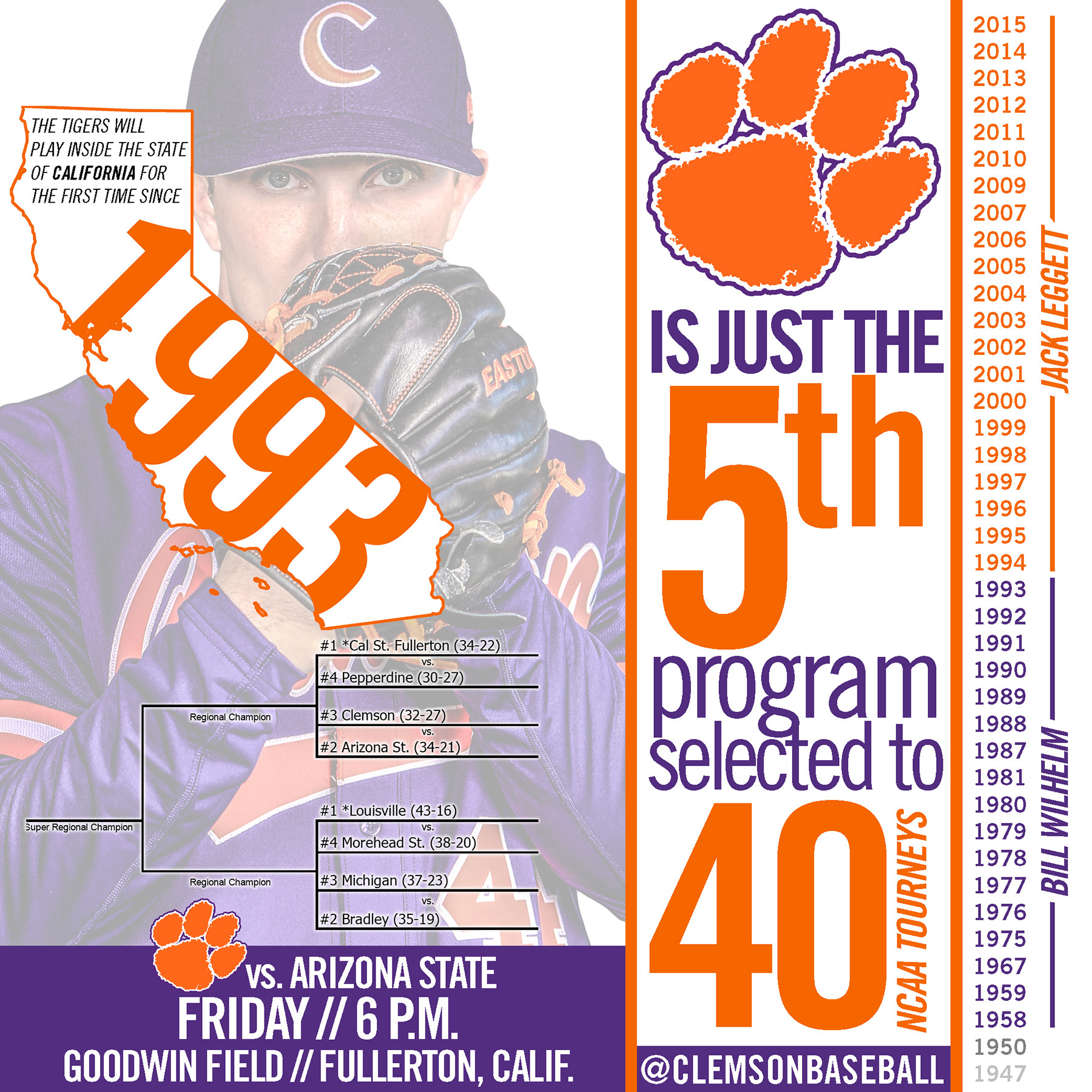 The Tigers head to the Fullerton (Calif.) Regional with No. 1 seed Cal State Fullerton, No. 2 seed Arizona State and No. 4 seed Pepperdine.

CLEMSON OVERVIEW• Clemson won one of three games in the ACC Tournament at Durham, N.C. The Tigers downed No. 3 Louisville 7-2.• The Tigers are averaging 6.3 runs per game and hitting .287 with a .376 on-base percentage and 61 steals.• The pitching staff has a 3.91 ERA, .249 opponents’ batting average and 2.51 strikeout-to-walk ratio and Clemson is fielding .960.

ARIZONA STATE OVERVIEW• Arizona State is led by first-year head coach Tracy Smith.• The Sun Devils won one game at Southern California last weekend. They are hitting .297 and have a 4.02 ERA and .974 fielding percentage.• Johnny Sewald is hitting .328 with 20 steals, while Colby Woodmansee is batting .314 with 43 RBIs.

TIGERS IN THE FULLERTON REGIONAL• Clemson (32-27), the No. 3 seed, opens the Fullerton Regional by playing No. 2 seed Arizona State (34-21) on Friday at 6 p.m. on ESPN3.• The Tigers will be the designated visiting team and occupy the first-base dugout Friday.• The winner of Clemson’s game plays the winner of the game between No. 1 seed Cal State Fullerton (34-22) and No. 4 seed Pepperdine (30-27).• The winner of the Fullerton Regional plays the winner of the Louisville (Ky.) Regional from June 5-8.• All four games against Arizona State have taken place in the NCAA Tourney. Clemson beat the Sun Devils 6-3 in the 2010 College World Series.• The Tigers’ only game against Cal State Fullerton was in the 2006 College World Series (7-6 Titan win).• The Tigers have never faced Pepperdine.

CLEMSON’S NCAA TOURNEY HISTORY• Clemson plays in its 40th all-time NCAA regional when it competes in the Fullerton Regional.• The 40 appearances are fifth-most in NCAA history, trailing only Texas (57), Florida State (53), Miami (Fla.) (44) and Oklahoma State (41).• Clemson has been to the NCAA Tournament every year since 1987 except one (2008).• The Tigers have been to the NCAA Tournament 28 of the last 29 years (including 2015).• Clemson is one of only 11 schools in the country to play in the NCAA Tournament each of the last seven seasons (including 2015).• The others are Arkansas, Cal State Fullerton, Florida, Florida State, Miami (Fla.), Oregon State, Rice, Texas A&M, Vanderbilt and Virginia.• Clemson has made nine super regional appearances, with its last in 2010.• The Tigers have made 12 trips to the College World Series, with its last in 2010.• Clemson has a 113-85 record (.571) in NCAA Tournament games.• Clemson is 68-45 (.602) under head coach Jack Leggett in NCAA Tournament play, including a 40-9 record (.816) in home NCAA Tournament games.• Leggett has taken the Tigers to a regional 21 times in the 22 years he has been Clemson’s head coach.

CALIFORNIA NOTES• Clemson has made just two trips to California in its history.• Clemson’s last game in the state of California was versus Missouri State in 1993 in a tournament in Fresno. Clemson was 3-3 in that tourney.• The other trip was in a tournament in Fresno in 1988, when Clemson also went 3-3.• Clemson has played 12 teams from the state of California and has a 12-16 record, incuding a 2-9 record in NCAA Tournament games.• The Tigers’ most recent games against a team from the state of California happened in a three-game sweep over Pacific at Clemson in 2007.• Clemson’s only meeting with Cal State Fullerton took place on June 20, 2006 in the College World Series. The Titans won 7-6.• Clemson has never faced Pepperdine.• Tyler Krieger was born in Laguna Hills, Calif. and played for Santa Barbara in the California Collegiate League during the summer of 2013.

QUICK HITS• Clemson is 8-3 in its last 11 games, as five of the eight wins have been against top-25 ranked teams and four against top-10 ranked teams.• Clemson, Louisville and Miami (Fla.) were the only ACC schools that did not suffer a three-game sweep during the 2015 regular season.• Clemson is 28-7 when outhitting the opponent and 2-18 when getting outhit.