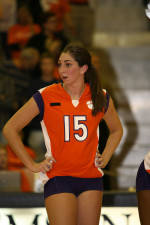 The Collegiate Volleyball Update (CVU.com) is pleased to announce that Clemson junior Kelsey Murphy has been selected as the CVU.com National Player of the Week for Sept. 15 through Sept. 21.

A 6-0 setter from New Lenox, Ill., Murphy guided the Tigers to a pair of victories over Florida A&M at the Clemson Classic as the team hit .338 for the week.

The junior got the week started tossing out 48 assists in a 3-2 loss to Georgia Tech, while just missing a triple-double with 11 digs, eight blocks and four kills. The triple-double would eventually come, though.

In Clemson’s next match, Murphy led the Tigers to .400 hitting while recording 40 assists, four digs, five blocks and a kill in a sweep of Florida A&M. The next day, in a rematch with the Rattlers, the junior setter put up even more impressive numbers.

Facing Florida A&M for a second time, Murphy directed Clemson to .333 hitting while becoming the first player in school history to record a triple-double consisting of assists, digs and blocks. She finished with 55 assists, 11 digs and 11 blocks. She also added three kills and an ace.

For the week Murphy averaged 11.92 assists, 2.17 digs and 2.0 blocks per set while also adding eight kills over Clemson’s 12 sets. She is only the eighth Clemson player to record a triple-double of any kind.