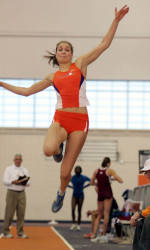 Clemson earned 14 points on day one of the ACC Indoor Track & Field Championships in the women’s competition. The pentathlon title was claimed by Lady Tiger newcomer Liane Weber, a freshman from Wangen, Germany. She posted an NCAA automatic qualifying total of 4,089 points, also a Clemson indoor facility record. Gunild Kreb of Virginia Tech was second, while Amy Seward of Miami finished third.

Weber’s point total surpassed her previous best of 3,941 points, which she accomplished last month at the JRF Multi-Event Challenge. The final event lifted Weber over Seward in the standings, as she posted a time of 2:18.44 in the 800m run. Teammate Linda Buchholz finished fifth in the competition, scoring four points for the Lady Tiger team. She posted a personal best 3,870 points, which is an NCAA provisional qualifying mark.

Weber is the first ACC indoor champion for the women’s team since Gisele Oliveira claimed the triple jump title at the 2005 meet. She is also the second Lady Tiger to win the pentathlon crown, as Lauren Nicholson claimed the prize at the 2004 meet.

Weber did a great job by surpassing her previous best in the high jump. She cleared a personal best 5’7.25″, which ranks fourth in school history in the high jump. Buchholz also did a solid job in that event, clearing 5’6″.

Buchholz remained strong in the shot put, as she was fifth-best with a mark of 40’3.25″. Weber, however, recorded a toss of 36’1.5″. She fell from first to third after the third event of the pentathlon.

Both performers closed the gap with first-place Amy Seward in the long jump, the fourth event of the afternoon. Weber was second overall with a season-best jump of 19’4.75″, while Buchholz came in fourth place with a leap of 19’1.25″.

The team returns to action on Friday for the second of three days of competition. The first women’s event will be the mile run at 1:50 PM. Clemson’s first action on Saturday will be the 60m high hurdles at 2:35 PM.