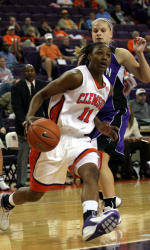 GREENSBORO, N.C. – Virginia’s Lyndra Littles and Clemson’s Lele Hardy were named Atlantic Coast Conference Women’s Basketball Player and Rookie of the Week after helping their squads to winning weeks. Littles, who averaged 23 points per game, led the Cavaliers on the week, while Hardy picks up her second collegiate honor following a 22-point, 10-rebound performance against conference foe Wake Forest.

Hardy set a career-high with the 22 points and tied her personal-best with 10 rebounds for her fourth double-double of the season. The rookie drained five three-pointers in the first half of Clemson’s 76-53 victory over the Demon Deacons, which doubled its conference win total from a year ago, and was also a career-best. Her previous high had been a pair of threes made several times this season. Hardy was 5-for-5 in the first half from behind the arc.

In addition, the forward tallied three steals, bringing her season total to 85, which ranks fourth in Clemson history. Hardy is now just two shy of tying the school record for steals by a freshman, a mark that has stood since the 1979-80 season. Hardy is the first player in 18 years to enter the top five list for steals in a single season. She also regained the ACC lead for steals per game with a 3.27 season average and remained in 10th place in the nation for that statistic.

Littles led UVa in its two games on the week. At Virginia Tech on Thursday, the sophomore paced the Cavs with 24 points and two blocks. Against Florida State on Sunday, Littles racked up her 13th double-double of the season (18th of her career) with game-highs of 22 points and 14 rebounds.

After 27 games, Littles is UVa’s leader in scoring (16.8 ppg) and rebounding (8.9 rpg). She also shoots a team-best .493 from the field and .770 from the line. Littles’ scoring mark ranks third in the league, second among conference games with a 17.3 points per game average. The forward from Washington, D.C., also ranks fourth in the ACC in rebounds and third in offensive boards.

The Cavaliers and Tigers wrap up the regular season this week. Clemson begins a two-game road swing, starting tonight at Georgia Tech, and concludes the 2006-07 season against Virginia at home on Sunday. The Cavs will also face the Yellow Jackets next as UVa. travels to Atlanta for a 7 p.m. contest on Thursday.