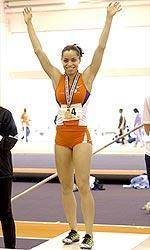 CLEMSON, SC – Clemson women’s track and field stand-out Lauren Nicholson was named a 2004 NSCA All-American Strength and Conditioning Athlete of the Year. The NSCA All-American Strength and Conditioning Athletes of the Year program recognizes those collegiate athletes, whose athletic accomplishments, in the opinion of their strength coach, reflect their dedication to strength training and conditioning. These athletes are also recognized for their academic and personal accomplishments and their integrity as student athletes. Nicholson is the 10th women’s track and field student athlete at Clemson to earn this accolade, and the first since 2001.

Nicholson, a senior from Marietta, GA, was the 2004 ACC pentathlon champion, earning All-ACC accolades as she captured the inaugural event title. She advanced to the NCAA Championships in the heptathlon a year ago, only the second Lady Tiger to do so. Nicholson was a regional qualifier in the long jump and as a member of the 4x400m relay team in 2003. In 2003, Nicholson finished third in the heptathlon at the conference meet to earn All-ACC honors. She ranks second on the Lady Tigers’ all-time list in the heptathlon with 5,200 points.

Tanna Burge, a strength and conditioning coach for the Lady Tigers said the following of Nicholson: “Lauren is one of the most determined and gifted athletes I have ever trained. There are not many things in the weight room that you can challenge Lauren with that she cannot succeed at when she puts her mind to it. Her animated character and work ethic draw recognition from her fellow student-athletes and coaches alike. Her spirit and enthusiasm in the weight room has been a key factor in her performance on the track. The 2003 year was an exciting and competitive one for Lauren when she was selected to the All-ACC team and competed at Nationals in the heptathlon. She is also ranked second in Clemson history in the heptathlon and looks to break that record and more in 2004. Lauren is not only dedicated in the weight room and on the track, but also in serving her community where she is active in fundraising campaigns for the Susan G. Komen Breast Cancer Foundation. Lauren is a truly unique athlete that will be difficult to replace.”