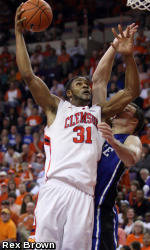 CLEMSON, SC – Andre Dawkins knocked down five three-pointers, including a pair in the final five minutes, and finished with 24 points in 27 minutes to pace the Duke Blue Devils to a 73-66 victory over the Clemson Tigers in front of a sellout crowd at Littlejohn Coliseum on Sunday night. The win improved Duke to 15-2 on the season and 3-0 in the ACC, while the Tigers fell to 9-8 overall and 1-2 in conference play.

The Blue Devils got ample contributions from the Plumlee brothers inside. Mason added 12 points and seven rebounds, while Miles contributed six points and 14 rebounds.

“I thought we competed hard,” Clemson Head Coach Brad Brownell said. “We did a good job causing turnovers for them and getting them out of rhythm. I thought we rebounded well and got to the free throw line, which is hard to do.

“It’s pick your poison. They have so many good players, it’s hard to keep them all down.”

The Tigers struggled from the free throw line, missing half of their 20 attempts from the charity stripe, but they kept the game close by limiting the Blue Devils to 43.9 percent from the floor and outrebounding Duke by one, a number which included 18 offensive rebounds.

The Clemson offense was ablaze to begin the game, scoring the game’s first six points and jumping out to a 10-2 advantage in the game’s first 3:50. The lead was extended to 13-4 on a Booker jump shot with 13:44 to play in the first half.

The Blue Devils then went on a spurt of their own, using an 11-2 run to take their first lead of the evening at 21-20 with 5:49 to play in the first half. Dawkins was the focal point of Duke’s attack during the stretch, scoring all of his team-leading ten first-half points in the final seven minutes. The advantage grew to as many as six before Booker’s baby hook drew the Tigers within four points at 32-28 at halftime.

Duke immediately extended the lead after the break with an 8-2 run that was punctuated by Curry’s runner and made the score 41-31 with 17:09 remaining. Out of a Clemson timeout, Duke established its largest lead at 13 points after Dawkins’ three-pointer made it a 46-33 game. Clemson countered with an 8-0 run that was capped by four straight points from Tanner Smith and cut the lead to five points.

Back-to-back three-point plays by Ryan Kelly and Mason Plumlee caused the lead to jump to 52-43 with 11:37 to play. The Tigers then cut the lead to six at 54-48 until a 9-2 Duke spurt gave the Blue Devils a seemingly comfortable edge at 63-50 on Dawkins’ fastbreak dunk with 4:19 to play.

A technical foul whistled on Dawkins for hanging on the rim seemed to give life to the Tigers. Brownell utilized a 1-3-1 half court trap to frustrate Duke, and the plan worked. Clemson used an 11-2 run to trim the lead back to four points at 65-61 with a minute to play.

Dawkins and Young traded three-pointers with under a minute to play. After Clemson’s defense forced Curry to miss a long jumper with under 25 seconds to play, the rebound was tipped out to Dawkins by a Blue Devil defender and the Tigers were forced to foul. Four made free throws down the stretch iced the game for Duke and gave the Blue Devils the victory.