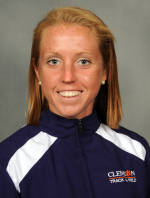 Lundy, a junior from Littleton, Colo., opened Maryland’s 2009 season with a first place finish at the UMES Lid-Lifter Saturday by covering the 8K course in 26:02.5, running the same course that will host the NCAA Mid-Atlantic Regional in November. Lundy was one of three Terps to finish in the top five as teammates Greg Kelsey placed second and Kyle Gaffney fourth. Maryland won the team title by a six-point margin (38-to-44) over second place Maryland.

Armstrong, a sophomore from Talbott, Tenn., earned ACC Women’s Performer of the Week recognition after capturing individual honors at this past weekend’s 5K Gamecock Invitational in Columbia, S.C. Armstrong, competing at the varsity level for the first time after spending the last two years with the club team on campus, led the Tigers to a second-place finish with her winning time of 17:51.03.