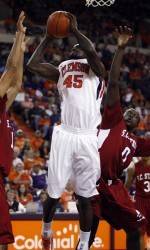 GREENSBORO, N.C. – Clemson’s Jerai Grant has been named the ACC Player of the Week, while Virginia’s KT Harrell was selected the ACC Rookie of the Week following their outstanding performances this past week.

It was the first-ever honor for Grant from the league office. It was Clemson’s first ACC Player-of-the-Week selection since Trevor Booker was a co-winner last January.

In Virginia’s only game this past week, Harrell scored a career-high 20 and had four rebounds in the Cavaliers’ 63-48 victory over Oregon on Dec. 17. The Montgomery, Ala., freshman was 8-of-12 from the field, and 4-6 from the free throw line. He also had one assist and one turnover in 35 minutes of action.