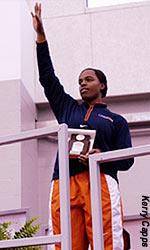 FAYETTEVILLE, AR – Clemson women’s track and field senior Jamine Moton set a NCAA meet record in the weight throw at the 2002 NCAA Indoor Track and Field Championships. Moton recorded a personal-best and school record mark en route to a second-place overall finish. The Lady Tiger set the record on her second throw of the day, a mark of 22.50m/73’10”. Moton’s previous best mark was 70’11.25″. Moton’s second-place mark stands for record purposes over Florida’s Candice Scott mark of 75’7.25″ due to implement measurements. Scott’s mark claimed the NCAA title under NCAA regulations, however, Moton’s mark was recorded using a legal ball whereas Scott’s implement did not measure legally following her winning mark. With this finish, Moton became only the second Lady Tiger in school history to finish in the top three in the nation in consecutive season. Currently she has more top three finishes than any other Lady Tiger in school history.

“Today I came to this meet to win,” said Moton. “I am not satisfied with my performance of second place, but I am content with the meet and collegiate record. Before I leave this arena, I will one way or another win a NCAA Championship. I know I can do it, I just have to make it happen.

This is the fourth All-American honor for the senior from Glassboro, NJ, who finished third in the weight throw a year ago. In 2001, Moton also finished as the runner-up in the shot put at the indoor and outdoor championships. Moton will compete Saturday afternoon in the shot put, an event in which she leads the nation by three feet with a mark of 56’7.5″.

“I am very proud of Jamine to finish her indoor collegiate career with a moral victory,” said assistant coach Cathrine Erickson. “I feel like she deserves the records and is motivated now to last throughout the outdoor season. She’s never before really felt like she wants to throw the hammer but today she told me she is looking forward to setting really good marks in not only the shot put and discus but especially the hammer. We are just proud to have been able to represent Clemson very well.”