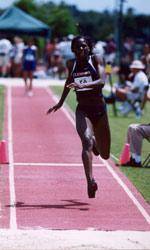 CLEMSON, SC – Two members of the Clemson women’s track and field team will compete at the USA Outdoor Track and Field Championships on Friday, June 21 through Sunday, June 23. Jamine Moton and Sheri Smith were accepted into this year’s senior national meet.

Smith, an indoor triple jump All-American, will compete in the finals of that event on Sat., June 22, at 4:30 PM. She has a personal-best mark of 43’0.5″ set at the 2002 ACC Championships. With that mark, Smith is tied with teammate Gisele Oliveira for the school record in the triple jump.