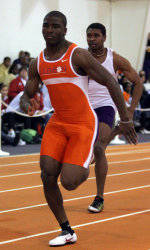 Clemson freshman Jacoby Ford has been named an ACC Performer of the Week, according to the conference office on Monday. He shares the honor with Walter Dix of Florida State. Both student-athletes posted NCAA automatic qualifying times in separate events.

Ford became the first Tiger to post an automatic NCAA mark this season. The Royal Palm Beach, Fla. native’s time of 6.60 in the 60 meter dash is second-best in the nation so far this season. It also is third-best in Clemson school history, trailing only former Olympians Michael Green and Shawn Crawford.

In posting his time of 6.60, he won Friday’s collegiate final at the Tyson Invitational. He has competed twice this season and has a win and runner-up finish in two 60m races for Clemson.