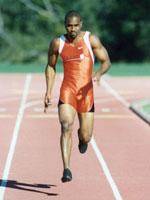 CLEMSON, S.C. – Clemson men’s track and field senior Jacey Harper was named the 2003 ACC Indoor Track and Field Championship’s Meet Most Valuable Performer, announced the conference office. This is the second meet MVP honor for the senior from Edinburgh, Trinidad. In 2001, Harper garnered the same honor after winning the 60m dash, 200m dash and 4x400m relay.

This year, Harper ran away with Most Valuable Performer honors after placing first in the 200m dash with a time of 21.48. He became the first athlete in ACC history to win three consecutive 200 meter dash titles, having won the event in 2001 and 2002. Harper’s time in the 200m was good enough to provisionally qualify him for the upcoming NCAA Indoor Track and Field Championships. The senior also earned All-ACC honors for his second-place finish in the 60 meter dash, an event in which he has also qualified for the NCAA Championships.