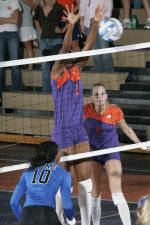 GREENSBORO, N.C. – Danielle Hepburn of Clemson becomes the first Tiger this season to be named Atlantic Coast Conference Volleyball Player of the Week. The league recognition is also a first for the sophomore this year, who posted career bests over the weekend en route to helping the Tigers notch a pair of conference victories.

A native of Miami, Fla., the 6-foot-2 middle hitter set a career high against NC State last Friday as she knocked down a match-high 15 kills and hit a personal-best .652 with no errors on 23 attempts. The following night versus North Carolina, Hepburn led Clemson to its first win over North Carolina since the 1999 season and the first victory at home over the Tar Heels since 1997. She finished with 14 kills and turned in a .467 clip with no errors on 30 attempts. In addition, she recorded a season high in block assists (10) and total blocks (10). Her block assists in the match tied a career mark that she set a year ago.

Hepburn averaged 4.83 kills and 2.33 blocks per game for the week and paced the league with a .547 hitting percentage last week.

The Tigers will play host to Georgia Tech tomorrow, October 17, before hitting the road this weekend. Clemson travels to Virginia on Friday, October 20, for a 7 p.m. nightcap and then heads to Virginia Tech for a 1 p.m. contest on Sunday, October 22.