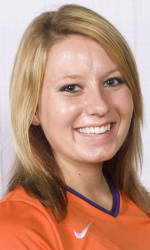 CLEMSON, SC – Clemson freshman setter Hannah Brenner has been named the ACC Volleyball Freshman of the Week after her performances in Clemson’s 2-0 weekend. The Tigers took down Maryland in four set and Boston College in three, largely behind Brenner’s play.

Clemson was one of two ACC teams to go undefeated on the weekend.

On Friday night, Brenner came up just shy of a triple-double with 46 assists, nine kills, and eight digs, while also adding four blocks. The Tigers hit .312 and had a season-best 59 kills on the night. The 46 assists and nine kills were both career-bests.

She followed that up with 39 assists and five blocks in only three sets in leading the Tigers to a 3-0 win over Boston College on Saturday night. The Tigers hit .318 for the match with 45 kills against only 11 attack errors.

She is the second Clemson player to garner the honor this season, as Mo Simmons was named the Freshman of the Week on Sept. 20. Simmons also had a strong weekend, picking up eight kills in each match and hitting .500 with five blocks.