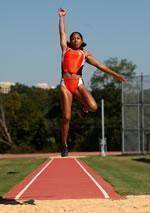 FAYETTEVILLE, AR – Clemson women’s track and field standout Gisele Oliveira claimed her first national crown, winning the NCAA indoor triple jump competition on Saturday at the Randal Tyson Track Complex. The senior from Porto Alegre, Brazil, captured the national championship with a career-best mark of 45’1.75″. Oliveira is the first Lady Tiger to win a NCAA title in an indoor field event, and only the third Lady Tiger to win any indoor National Championship. Her winning mark set the Clemson record and the Brazilian indoor national record, and she became only the third women’s student-athlete from the ACC to win an indoor triple jump NCAA Championship.

Oliveira said, “I am so excited. I am thankful to Coach Marcia for all the hard work and coaching she has given me. This is what we have worked for.”

“It paid off to stick to our plan to only train in the triple jump indoor this year,” said Clemson head coach Marcia Noad. “After four years of battling injury indoor, all I can say is patience is a virtue. I would not trade this moment for anything.”