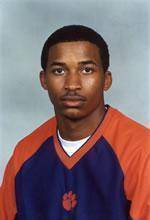 At the Virginia Tech Last Chance Meet in Blacksburg, VA, Kitchens won the long jump competition with an indoor career-best and school-record mark of 25’4.75″. That leap was also a provisional qualifying mark. Bell was the top collegiate finisher with his season-best and provisional qualifying mark of 52’1.75″. He ranks third on Clemson’s all-time list with that mark. Adam Linkenauger placed second in the high jump with a clearance of 6’10.75″.

Cheney finished fifth in the 60m hurdles with a time of 7.88, after posting a season-best and provisional-qualifying time of 7.87 in the preliminaries of the event. In the semi-finals, he recorded a time of 7.90. In the 60m dash, Ronald Richards crossed the finish line in the semi-finals of the 60m in 6.78 after running a 6.79 in the preliminaries. The Tigers’ 4x400m relay team of Richards, Michael Bolling, Rashad Gardner and Cheney also turned in a season-best effort with a 10th-place finish and time of 3:10.52.

Magidi moved into fourth on the Tigers’ all-time indoor list in the 3000m with his performance at the Alex Wilson Invitational. He placed fifth with a time of 8:05.09, narrowly missing a NCAA qualifying mark. Derrick Wyatt crossed the finish line in 8:12.80 to finish 14th among collegiate competitors.