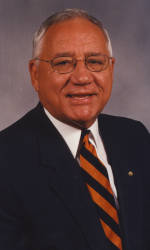 Bennett served as Executive Secretary to IPTAY (Clemson’s Athletic Scholarship Club) for a total of 22 years. As an undergraduate at Clemson and cheerleader, Bennett instituted the firing of the cannon after Clemson touchdowns during football games, a tradition that is carried out today. He started his career at Clemson in 1967 as an alumni field director, later moving on to become assistant athletics director for business and then executive director of IPTAY. His leadership led to a doubling of IPTAY contributions and an increase in membership.

Bennett was an Associate Athletic Director for Financial Development and Executive Director of the Commodore Club in 1979-1986. In 1986-1989, he was the Athletic Director at Furman University and during his tenure, Furman won the National I-AA National Championship in Football in 1988.

After a four-year stint as Executive Vice President for Development at the Baptist Hospital in Nashville, TN, Bennett returned to Clemson in 1993 as the Executive Director of IPTAY until his retirement in 2004.

In 1984, Bennett was named National Athletics Fund Raiser of the year and again in 2001 with the Order of the Palmetto, South Carolina’s highest civilian award. He was inducted into Clemson’s Athletics Hall of fame and received the Clemson University’s Alumni Association Distinguished Service Award. In 2004, he was presented a Lifetime Achievement Award by the National Association of Athletics Directors.

Bennett will receive the award on Monday, May 19, at the SCAHOF banquet at the Columbia Metropolitan Convention Center. For tickets and more info, call (803) 779-0905.

The banquet will feature the honoring of several award winners as well as the induction of the Class of 2008 that includes of Mike Dunleavy, Levon Kirkland, Bob Bolin, Ernie Jackson, Carl Williams, Dottie Pepper and Tom Price.

About 40 Palmetto State legends from the past covering some six decades will return for the blue jacket ceremony, making the affair the greatest and most wide-ranging assembly of sports stars in one gathering.