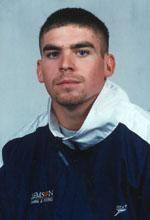 AUBURN, AL – Clemson’s Eric Shulick finished in 13th-place in the one-meter diving competition at the 2003 NCAA Zone B Diving Regional on Friday. Shulick posted 547.55 points in the finals of the event held at Auburn’s Martin Aquatics Center.

Shulick and Thomas will compete for the Tigers in the three-meter competition on Saturday. The event is scheduled to begin at 3:30 p.m. and will be held at the Martin Aquatics Center.