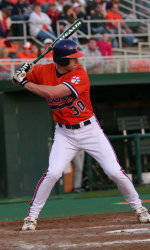 GREENSBORO, N.C. – Doug Hogan of Clemson has been selected Atlantic Coast Conference Baseball Player of the Week for the first time this season. He shared the weekly honors with Virginia’s Jacob Thompson.

Hogan was 9-for-18 (.500) with three home runs, six RBI, a .500 batting average, a .625 on-base percentage, and 1.000 slugging percentage in five starts last week, four of which were against teams in the top 20 in the nation. The catcher started the week off with a grand slam and a solo homer (five RBI) against Elon last Tuesday.

Over the weekend against No. 19 Georgia Tech, Hogan hit a dramatic, walkoff home run to lead off the 11th inning in Clemson’s 3-2 comeback win on Friday. Two days later, he went 3-for-3 with two walks as he reached base in all five of his plate appearances in that game. For the week, the junior from Columbia, S.C., scored six runs, walked five times, and was hit by a pitch.

Clemson returns to the diamond this weekend, hosting a three-game series against Boston College.