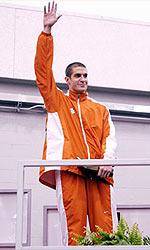 Ameigh, a native of Washingtonville, PA, earned third-team honors with a cumulative 3.33 GPA in Mathematics Teaching. The mathematics teaching major was a 2002 NCAA Indoor All-American in the high jump, finishing fourth at this year’s Championships. Ameigh cleared a career-best 7’3″ during the indoor season to rank third on Clemson’s all-time indoor high jump list. The eight-time All-ACC honoree finished second at the 2002 ACC Indoor Championships. He was the ACC Champion indoor and outdoor as a freshman (1999), and repeated as indoor champion in 2001. He is a member of the Clemson and ACC Academic Honor Rolls.

The Verizon Academic All-America Teams are selected by a vote of the 1,800-member CoSIDA. To be eligible, an athlete must be a varsity starter or key reserve and maintain a cumulative GPA of at least 3.20 on a scale of 4.00. Sports information directors nominate eligible athletes from their schools who are named to district teams prior to being voted upon the national level.

“This group of student-athletes typifies the kind of individuals the founders had in mind when the Academic All-America program was formed in 1952. In this, our 50th anniversary year, the members of CoSIDA are proud to play a part in this tremendous program,” said Dick Lipe, CoSIDA’s Academic All-America chairman.

Under an agreement with CoSIDA, Verizon, formerly GTE, has been the exclusive sponsor of the Academic All-America program since 1985. Verizon, America’s literacy champion, strongly believes that literacy is a key ingredient to success and outstanding achievements in life. The Academic All-America program is an integral part of Verizon Reads, the company’s national campaign to promote literacy through corporate philanthropy, partner collaboration, community outreach, and customer and employee participation. (Note: See attachment for additional Verizon literacy information.)