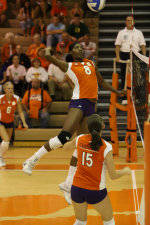 GREENSBORO, N.C. – Clemson’s Danielle Hepburn, a senior middle blocker from Miami, Fla., was selected today as the Atlantic Coast Conference Volleyball Player of the Week after she helped Clemson erase a two-set deficit on the road at Georgia Tech last week.

Hepburn scored 18 kills on 33 attempts with only four errors in the five-set victory over Georgia Tech. She hit .424 in the final match of the regular season to close the regulation campaign with a .397 hitting percentage to break her own school record. She also scored seven of Clemson’s 18 blocks in the match as the Tigers held Georgia Tech to a .157 hitting percentage.

On Sunday, Clemson was selected to the 2008 NCAA Volleyball Championships and will host the first and second rounds. The Tigers open the Championship with an all-orange battle against Tennessee on Friday night. ACC Co-Champions North Carolina and Duke also received bids to the 64-team tournament.