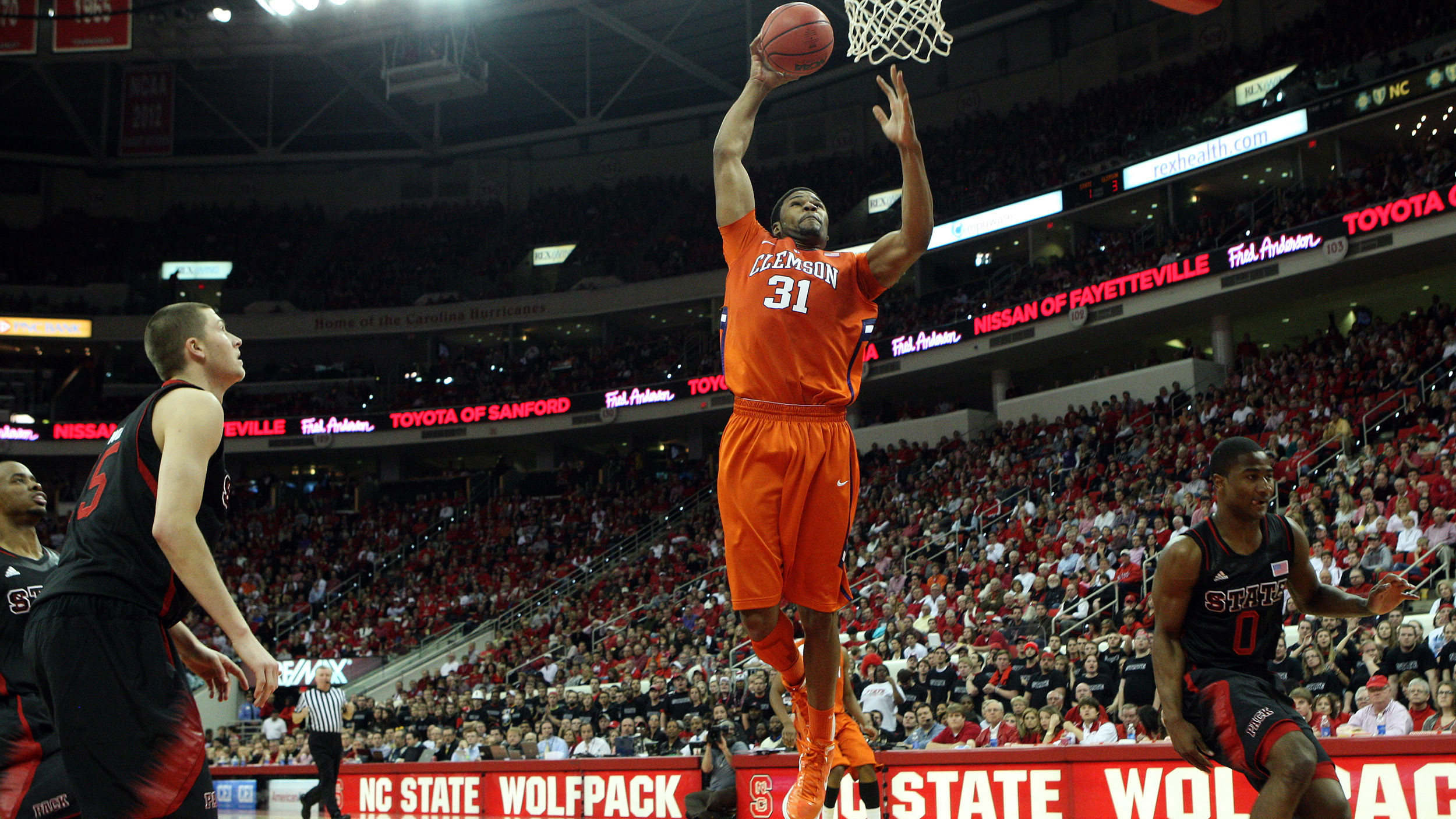 RALEIGH, NC – Clemson fell behind 10-0 only to tie it twice in the second half in an upset bid against No. 14 NC State at PNC Arena, but the Wolfpack escaped with a 66-62 win to improve to 11-0 at home this season. NC State moved to 15-3 overall, 4-1 in the ACC. Clemson fell to 10-7 on the season, 2-3 in league play.Devin Booker had a game- and career-high 27 points for the Tigers. The 6-foot-8 center set a career-high with 13 field goals in 18 attempts. It was the second highest point total by a Tiger in 82 games under Head Coach Brad Brownell. Only Andre Young’s 29 against Georgia Tech last season was better. Rod Hall added a season-high 16 points, hitting 7-of-13 field goals. Hall had 12 after halftime.Clemson shot 50 percent in the second half and 40.6 percent for the game. NC State was held to 45.1 percent shooting, the first time this season the Wolfpack won a game in which it shot less than 50 percent as a team. T.J. Warren was 9-for-11 for 21 points – his fourth 20-point effort of the season – to lead the ‘Pack. Three players added 11 apiece, including freshman Rodney Purvis who was hot early.The ‘Pack jumped out to a 10-0 lead as it made four of its first five field goal attempts. Purvis made his first three from outside the arc, but Clemson cut the lead to five at 15-12 on four straight baskets by Booker. Scott Wood ended the 15-2 Tiger run with a three-pointer off an offensive rebound.The lead stretched to double figures again at 26-16 on a driving layup by Warren. Booker banked in one from the left block to pull within eight at 28-20, and then Hall followed with a drive from the right side to cut it to six. NC State got a couple more baskets from Warren inside the final minute to make it a 10-point lead, but Booker’s ninth field goal on a putback made it 34-26 at intermission.Milton Jennings, who was 0-for-5 in the opening half, finally got the lid off the basket to bury a three from the top of the key to make it 37-32, but Richard Howell responded with a free throw line jumper to push the lead to seven. A lob to Booker for a thunderous jam and a free throw on the next trip cut the lead to 40-35.Back-to-back threes by McDaniels cut the lead to three at 46-43, but Wood again answered with a big trifecta. Hall and Booker connected on a full court alley-oop with just over eight remaining that cut the lead to two at 49-47. The Tigers pulled to within one at 52-51 on Hall’s third driving layup of the night, forcing a Mark Gottfried timeout. Hall tied it moments later with another driving layup and subsequent free throw.Jennings tied it a second time at 57, but Howell responded with a three-point play on the other end after a beautiful feed from Wood. The sharpshooter from Indiana made it a four-point lead before Hall responded with a layup at 23.4 seconds left. Jennings hit his third three of the half to make it 63-62 with 12.9 remaining. Still down only three with just 8.7 left, Hall turned the ball over on the inbounds pass before Lorenzo Brown iced it with a second free throw.The Tigers stay on the road for their next contest, Thursday at Florida State. The game will be televised by the ACC Network and will tip off at 8:00 PM.