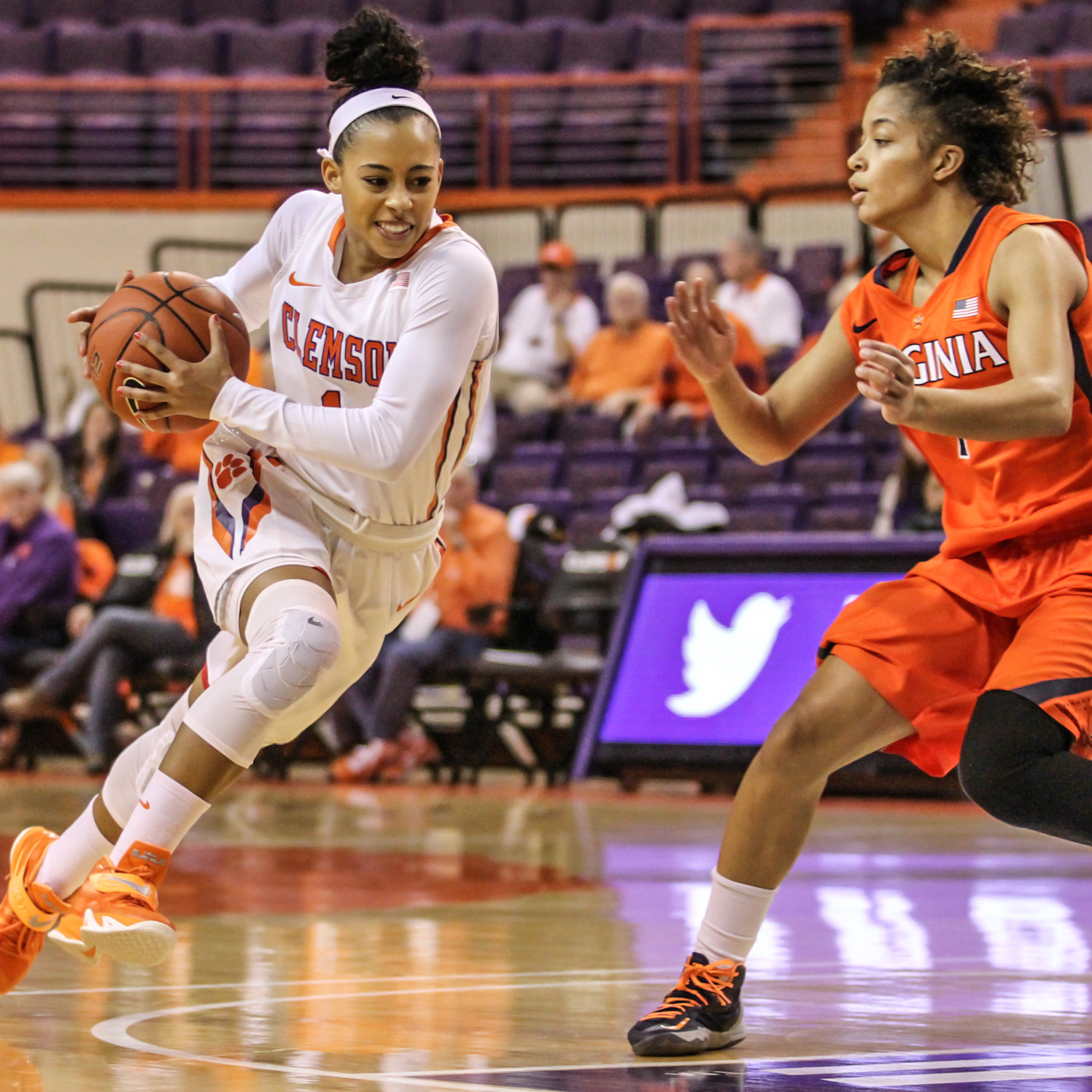 CLEMSON, S.C. – Clemson overcame a 19-point second half deficit to take a brief lead with four minutes to play, but cold shooting down the stretch allowed Virginia to claim a 77-72 victory at Littlejohn Coliseum on Sunday afternoon. The loss drops Clemson’s record to 9-13 (1-8 ACC) while Virginia improved to 15-7 (5-4 ACC) with the win.

Trailing 53-34 just two minutes into the second half, Clemson went on 34-14 run over the span of 12:22, culminated by a Lindsay three pointer to take a 68-67 lead. The Tigers made just one of their final seven shots down the stretch, though, allowing the Cavaliers to retake the lead and ultimately win the game.

A trio of Tigers scored in double-figures, led by sophomore Tiffany Lewis’ game and career-high 19 points. Nikki Dixon followed suit with her fourth double-double of the season (17 points, 11 rebounds) and Chelsea Lindsay chipped in with 11 points, a career-high-tying eight rebounds, and a season-high six assists.

Virginia came out of the gates on fire, shooting .621 percent from the field and made 9-14 from behind the arc in the first half to take a 15-point lead into halftime. The Tiger D responded in the second half, holding the Cavaliers to 10-34 to pave the way for the comeback.

Clemson had a season-best 45 rebounds and plus-11 rebounding margin, and tallied a season-high 21 second chance points in the effort.

Clemson returns to action on Thursday, Feb. 5 when the Tigers face Boston College in Chestnut Hill, Mass. Tip-off between the Tigers and Eagles is at 7 p.m.

“We missed 15 layups and as coaches we can’t draw up anything easier for them to get them a wide open layup. It’s all well and good that we played well and had that comeback, but my question is where was all that energy in the first half? If we played like we did in the middle of the second half throughout the entire game we wouldn’t need to dig ourselves out of a hole. It takes a lot of energy to dig yourself out of a 19-point hole both emotionally and physically. When we’re in a position to win a ballgame like this, which would be a huge victory for us, we have to do a better job with layups and executing. Nikki Dixon had a double-double, which is fantastic, but she can’t miss layups. I’m proud of the way they fought and how they came back, but we need to get to a point where we start games like that.”

Despite being down 15 at halftime and trailing by as many as 19 in the second half, the Clemson Tigers mounted a ferocious second half comeback and finally took the lead on a three-pointer by senior Chelsea Lindsay with four minutes to go. After a few led changes, the Cavaliers took the lead with 1:47 go and would not relinquish it for the remainder of the game, winning by a final score of 77-72. The Tigers outscored the Cavaliers 40-30 in the second half and outrebounded Virginia 45-34, the highest positive rebounding margin for the Tigers this season. The Tiger comeback was primarily led by the duo of sophomore Tiffany Lewis (19 pts) and senior Nikki Dixon (17 pts). Every Clemson player who saw action scored in the contest and sophomore Tiffany Lewis scored her career high, providing a much needed spark for the Tiger offense.

The Virginia offense was too much for the Tigers, especially in the first half. The Cavaliers knocked down ten threes on only nineteen attempts (53%) and only turned the ball over seven times in the entire game. However, the takeaway from this game is how the Tigers battled back and did not give up, even when the Cavaliers led by 19 points early in the second half. The Tigers connected on eight three pointers and shot 38% from the floor, all season highs in ACC play. Let’s hope the Tigers can build on the confidence gained from this stellar performance against the Cavaliers, and go get a win in Boston on Thursday as they take on Boston College at 7 pm. Clemson has won its last two meetings against Boston College, dating back to the 2012-2013 season.