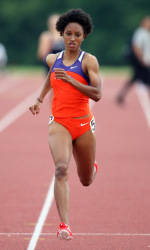 CLEMSON, SC – Clemson red-shirt sophomore Brianna Rollins broke the school record in the women’s 100 hurdles to advance to the U.S. Olympic Trials final, where she placed sixth overall against the most elite field in the world. Rollins ran 12.94 into a strong headwind in the final after a personal best 12.70 in the semifinals, the second-best time of that round.

Rollins was one of two collegians to make the final on Saturday, along with NCAA indoor and outdoor champion Christina Manning of Ohio State. Rollins’ teammate, Bridgette Owens, posted a time of 12.92 in the same semifinal and was 11th overall, three spots out of making the final. Both have two years of outdoor eligibility remaining for Clemson.

Miller Moss was seventh in the decathlon (7,712 points) at Hayward Field. The three-time Clemson All-American hit a personal best in the discus, the second event of the day. His best mark ended up being 146’10” on his third attempt, which was third-best overall. Moss, who trains in Austin, TX with 2012 runner-up Trey Hardee, never had a discus mark of more than 133’8″ in four years with the Tigers. He also had a personal best in the javelin at 174’7″, before finishing with a time of 4:36.84 in the 1500 meters.

In men’s 100-meter dash preliminaries, both Justin Murdock and Travis Padgett advanced to Sunday’s semifinals. Padgett, a 2008 Olympian and six-time All-American for the Tigers from 2005-08, clocked a 10.33 to automatically advance as a top-three finisher in his heat. Murdock was the final qualifier on time (10.41). The semis will be held Sunday at 5:30 PM EDT. Should either or both advance to the final, it will take place at 7:48 PM EDT and be shown live on NBC.

April Sinkler concluded her Clemson career on Saturday. The seven-time All-American hit a mark of 42’1.25″ and was 14th out of 24 competitors, but did not advance to the final

The men’s long jump final will be held Sunday at 6:00 PM EDT. Former Clemson jumpers George Kitchens will be among 12 vying for spots on the U.S. Olympic Team.