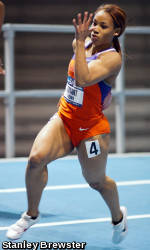 Rollins earned the honor for the first time in her career, and for the first time ever for a Clemson female. Rollins, a native of Miami, FL, won her first individual ACC championship when she clocked a time of 8.07 and claimed the 60 hurdles crown at Reggie Lewis Track Center in Boston, MA last month. She followed that with a runner-up finish at the NCAA Indoor Championships last week in Idaho. It was the second straight top-two finish for Rollins at the national meet in the event.

Bryant is the third Tiger female to win ACC Indoor Freshman of the Year honors, joining Liane Weber in 2007 and Rollins in 2010. Bryant took home ACC Meet Most Valuable Performer honors in February after winning the 60 dash and 200 dash in Boston. She qualified for the NCAA Championships in both events, and finished sixth in the 60 and seventh in the 200 last week in Idaho. Bryant was the first Tiger female to earn All-America honors in both events in the same season.