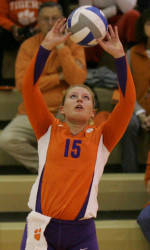 GREENSBORO, NC – Clemson setter Hannah Brenner has been named the ACC Freshman of the Week as announced by the league on Monday. Brenner led the Tigers to 3-1 wins over Virginia and Virginia Tech on Friday and Saturday.

On Friday, Brenner led Clemson to a season-high 66 kills and a .278 attack pct, while registering a double-double of 53 assists and 10 digs. She also added seven kills and three blocks in the match.

On Saturday, she led Clemson to .308 hitting with 46 assists, five digs, four blocks and four kills in a four-set win over Virginia Tech. On the weekend, she averaged 12.38 assists per set and 1.88 digs per set, and Clemson hit .292 as a team.

It is Brenner’s second honor of the season, as she earned the title on Oct. 24 after leading Clemson to wins over Maryland and Boston College during the previous weekend. It is the third overall honor for a Tiger this season, as Mo Simmons earned the award in early September following Clemson’s win in the Big Orange Bash.