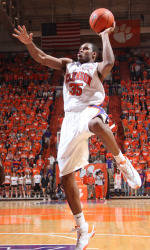 Clemson, SC – Clemson forward Trevor Booker added to his collection of individual honors on Tuesday. He was named a fourth-team All-American, according to national sportswriter Jeff Goodman at FoxSports.com. He also was an All-District selection by the U.S. Basketball Writers Association (USBWA). Finally, he was named to the league’s All-Defensive Team according to Fan’s Guide to ACC Basketball, which is determined by a vote of the league’s 12 head coaches.

Booker leads the 17th-ranked Tigers in points per game (15.2) and rebounds per game (9.7). On Monday, the junior from Whitmire, SC was named second-team All-ACC by the Atlantic Coast Sports Media Association (ACSMA). Booker currently leads the conference in rebounds per game and field goal percentage (.569). He also ranks second among league players in blocked shots per game (2.1), and was named to the ACSMA’s All-Defensive Team on Monday as well.

It marks the second straight year Clemson has had an All-District III selection by the USBWA. Last season, senior guard Cliff Hammonds took home the honor. Booker’s selection to the coaches’ All-Defensive Team marks the fourth straight season in which a player under Oliver Purnell has been cited for excellence on the defensive end of the floor. Vernon Hamilton was selected in 2006 and 2007, while James Mays was in 2007 and 2008. Hammonds was also picked for last year’s All-Defensive Team by the coaches.