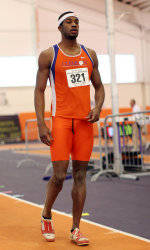 Philadelphia, PA – The men’s track & field team concluded its action at the 113th Penn Relays on Saturday. The Tigers’ Jason Bell posted a regional-qualifying mark in the triple jump, while the 4x100m relay team also surpassed the regional standard in their final.

Corey Brown finished fifth in the finals of the 100m dash, giving the Tigers consecutive top-five finishes in the event. Travis Padgett won the crown last season as a freshman. Brown posted a time of 10.57 seconds Saturday.

Brown also ran second leg for Clemson’s 4x100m relay team, which finished runner-up in the collegiate-level final. The group of Gwantaveus Anderson, Brown, Padgett, and Cowin Mills improved on their prelim time and ran a 40.30 on Saturday. In the 4x200m relay, the same group finished fifth in the finals with a time of 1:24.20.

Jason Bell had a season-best mark in the triple jump Saturday. The senior from Warner Robins, GA recorded a leap of 51’5.5″ and finished in third place in the championship flight. Mitch Greeley was runner-up in the pole vault championship after a clearance of 16’5″.

The Tigers return to action on May 11-12 for the Georgia Tech Invitational in Atlanta, GA.