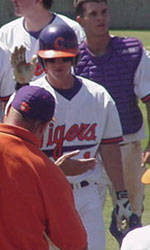 Now, everyone else in college baseball agrees.

Clemson, at 24-1 with a 7-1 victory against East Tennessee on Tuesday, is ranked No. 1 in the sport’s three major polls.

It’s the first time in seven seasons the Tigers were an unanimous No. 1 selection in polls by Baseball America, Collegiate Baseball and ESPN/Baseball Weekly.

“We’ve had some pretty good teams up here,” said Leggett, who has been to the College World Series three times in eight previous seasons with Clemson. “But I thought maybe this team could jump over the edge if those two kids came back to school.”

From the moment the Tigers were swept by eventual series champion Miami in the NCAA tournament’s Super Regional last year, first baseman Michael Johnson said, “we knew we wanted to do what we could to take one step further.”

A big part of that was corralling Reba and Greene.

One of the trickiest tasks for a college baseball coach is convincing their junior stars back for a final year. Greene was taken by the Chicago Cubs in the 14th round, while Oakland chose Reba in the 16th round.

Leggett wanted them back badly, but let their past experiences and potential for success this season at Clemson sway them.

Greene and Reba both saw what the Tigers were building.

“It become more evident we have something special here,” Reba said. “It was a great decision to come back and I think Khalil agrees.”

The Tigers, who suffered their only loss on March 16 against South Alabama, have averaged more than 10 runs a game, and their pitching staff has allowed fewer than 3{. That’s a formula for lots of blowouts.

“We’ve been real focused on what we have to do this year,” Leggett said. “We’re playing pretty well right now.”

Reba has won 11 straight games, keeping opponents off balance with an assortment of deliveries. Greene, a converted third baseman, is more comfortable at shortstop and swinging an incredible bat with 49 hits in 101 at-bats. He also leads the Tigers with 39 RBIs.

“Honestly, I don’t know where I’d pitch him,” Leggett said.

And it’s more than just Reba and Greene.

Johnson, a junior, already has 12 homers after hitting 18 last season. Outfielder Kyle Frank is hitting .407 with nine doubles. Right-hander Matt Henrie is 6-0 with a 1.98 ERA to lead Clemson starters.

“Even when we struggle against opposing pitchers, we don’t worry,” Johnson said. “We know we’re going to start figuring it out.”

Leggett was proud of his team’s unanimous ranking atop college baseball polls. But he realizes the Tigers have played only one series in the tough Atlantic Coast Conference and are a long way from purchasing tickets to Omaha.

“The guys have worked hard and this is a great honor,” he said. “At the same time, we realize what kind of game baseball is. All this can be gone in a second.”

For now, the players are going to enjoy being No. 1 without taking their eyes of the ultimate goal of an NCAA baseball championship, Johnson said.

“It seems like when we take the field since the rankings, the cheers are a little bit louder,” he said. “We hope we can keep that going all year.”