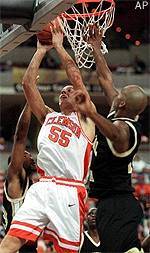 CLEMSON, S.C. — Starting center Adam Allenspach will miss at least the Georgia Tech game on Wednesday night at Littlejohn Coliseum due to a bulging disk in his back. Allenspach suffered the injury early in the first half of Clemson’s 93-59 loss at Duke on Saturday.

After hitting a 15-foot corner jumper, Allenspach collapsed in pain near midcourt. He did not play the rest of the game.

It was first believed that Allenspach had suffered a hip-pointer, but an MRI on Sunday revealed the disk problem. He is listed as questionable at this time for Sunday’s game with North Carolina at Littlejohn Coliseum.

Allenspach, a junior, is one of the prime reasons Clemson has led the ACC and ranks 14th in the nation in rebounding this year. He has averaged 12.1 points and 7.4 rebounds per game and is shooting 49 percent from the field. He is second on the Tiger team in scoring, first in rebounding and second in field goal percentage. He is also one of Clemson’s top free throw shooters with a 71 percent mark and is a big reason opposing starting centers have failed to record a double-double against the Tigers this year.

The Georgia Tech game on Feb. 2 will be just the second game Allenspach has missed in his career. He has played 86 of the last 87 Clemson games, missing only the Western Michigan game in the 1998 NCAA tournament.

This will be the first game he has missed in his Clemson career due to injury.

Clemson Head Coach Larry Shyatt did not announce a replacement for Allenspach in Clemson’s starting lineup.